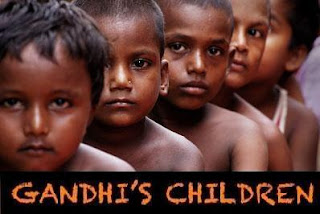 The film Gandhi’s Children will be shown at the Citizens for Peace meeting at 7 pm. on Tuesday, October 8th at Unity of Livonia.  This film focuses on the lives of several groups of modern day untouchables in India.  “The untouchables are forced to lead a heartrending life.  They are not allowed to drink from the same wells, attend the same temples, and wear shoes in the presence of the upper caste, or fall in love with a member of another caste”, said Vishnu Vasu, the film’s director.  “After realizing the untouchables are socially and physically excluded, I decided it was high time that someone spoke about it at an international level”.  The film has played at over thirty film festivals and has won eight awards for Best Documentary Cinematography.


The public is invited to view and discuss this powerful film about the powerless in India.
Posted by colleen mills at 9:19 AM