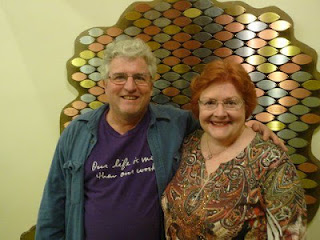 What a great concert Steve performed for the Citizens for Peace 9th Anniversary!!

Our 9th Anniversary was a magical evening thanks to the wonderful music of Steve Deasy.
He designed the concert for the Citizens for Peace. He played the piano, guitar and harmonica;
and sang his own songs as well as songs from fellow songwriters. The concert was full of peace songs including his original song "Let Me Make Peace" and "Imagine". Steve sang some hilarious songs, as
well as songs that brought a few tears. If you would like to buy his CD, let me know.
Giving Caroline & Jerry Trout our first Compassionate Citizen Award was so special. Caroline was
surrounded by her family and friends. Let's hope we can follow Caroline & Jerry's example and be
more compassionate in 2013.
PEACE & HAPPY THANKSGIVING!
Colleen
Posted by colleen mills at 2:26 PM No comments: