Mike Whitty gave a terrific talk to the Citizens for Peace about Making Peace With Detroit. Thanks to Jerome Sawyer for recording it, we can view a part of his uplifting talk at this link. http://vimeo.com/39989063
Posted by colleen mills at 7:36 AM No comments:

The religious diversity of India will be examined during a free public presentation by Michigan author, photographer, traveler, and speaker, Robert M. Weir at Unity Church of Livonia at 7 PM Tuesday, May 8.

Hosted by the Citizens for Peace as part of their efforts to increase public awareness of peaceful means, Weir is among a long list of notable, highly regarded speakers invited to speak during the group’s monthly meetings.

One doesn’t have to be religious to appreciate the religious diversity of the world’s second largest nation of over one billion people. Religious freedom is in the constitution of India. There are over 25 million Christians living in India. The Muslim population in India is the third largest in the world. Hinduism is the predominant religion in India and has had a big influence on the west with the influx of yoga and meditation. The other major faiths in India include Buddhism, Sikhism, Judaism, Jainism, and Zoroastrianism.

During 2011 -2012, Weir traveled the Himalayas, lived in a Calcutta Muslim slum, visited families’ homes, participated in festivals and interacted with people of all faiths. A Michigan native, freelance writer, editor, public speaker, authors’ coach, and communications consultant, Weir writes about people, peace, social justice, environment, and outdoor adventures. He has written several books and more than 130 published articles as well as editing the work of other writers. He strives to simplify and create. His motto is “Have Laptop, Will Travel.”

For further information contact Colleen Mills at 734-425-0079 or go to the website www.citizensforpeace11.blogspot.com.
Posted by colleen mills at 9:11 AM No comments:

Our president Colleen Mills does an outstanding job in leading Citizens for Peace.
Posted by Bob at 4:25 PM No comments: 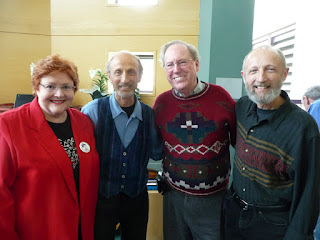 The Gemini brothers gave a moving concert at the Westland Library kickoff of our Peace Collection on Sunday afternoon! "If I Had a Hammer: Songs and Poems for Peace and Justice" was the title of this beautiful concert. Playing several instruments, the Gemini twins led the audience on a sing along of many popular songs such as "Where Have All the Flowers Gone?", "This Land is My Land", "Kumbaya" and "We Shall Overcome". Included in their diverse concert were beautiful poems and songs of many languages.

Our International Peace Pals display of the art from children representing 68 different countries was a perfect visual to highlight the new peace books donated to the library since many of the new books are books for children.

Our thanks to Marilyn Kwik for organizing such a special day! She also has a Citizens for Peace display with our information as people enter the Westland Library.
Thanks to Bob Frank for making the initial contact with his library. Thanks to Rosemary Doyle for all of her work with the Collection of Nonviolent Materials. Our Season for Nonviolence Book Discussion at the Livonia Civic Center Library was a great success! Thanks to everyone who came to the concert and the Book Discussion series!

The photo from left to right shows the smiles of Colleen, Laz, Bob and San.
Posted by colleen mills at 6:42 AM No comments: