Get tickets now for the Cosmic Comic Show Sept. 26th! 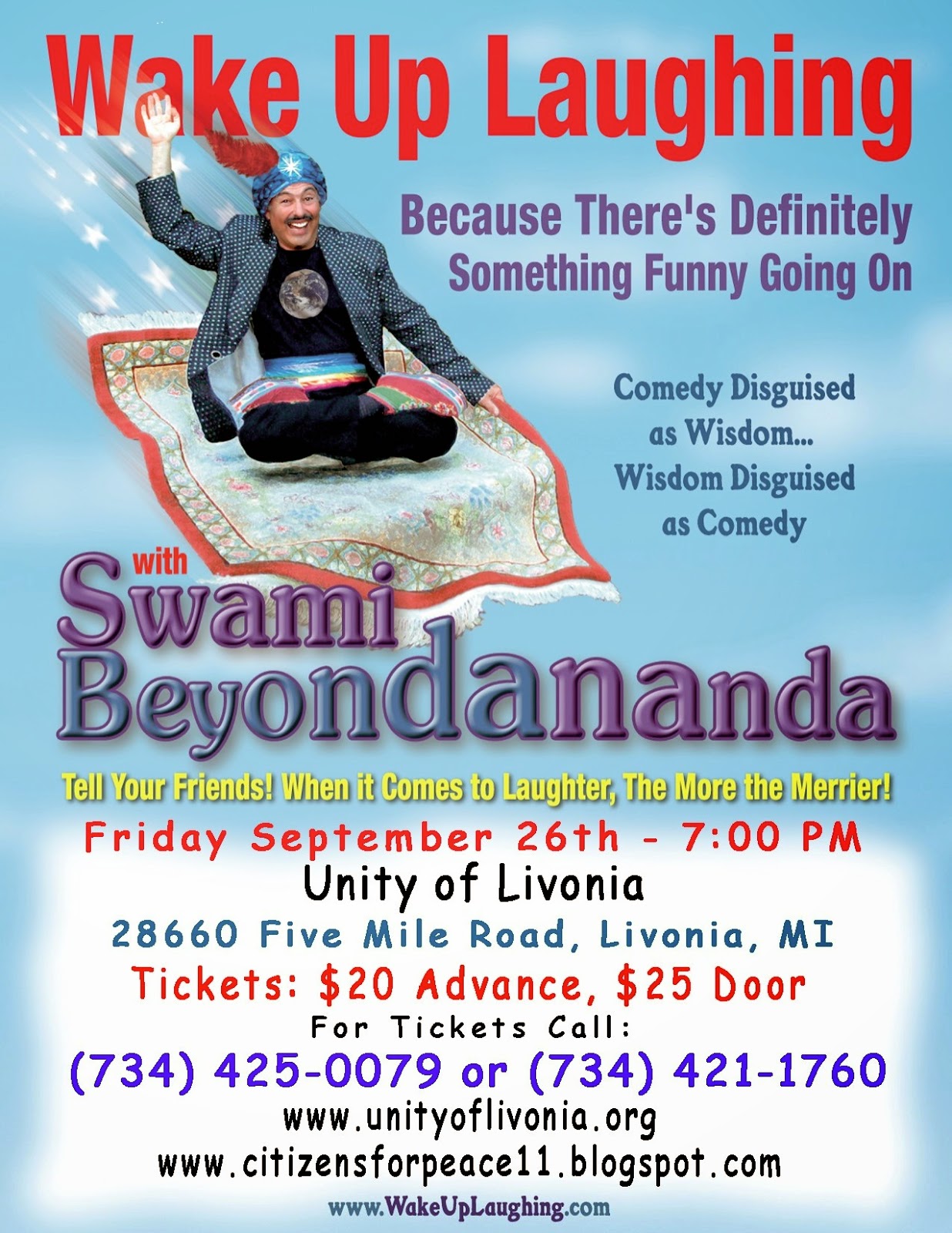 Swami Beyondanada, the Cosmic Comic since 1985, will bring his unique and uplifting comedy to Michigan on Friday, September 26th.  The laughter begins at 7 pm. at Unity of Livonia, 28660 Five Mile Rd.  The show is a FUNdraiser for the Citizens for Peace and Unity of Livonia.  Tickets are $20. in advance, or $25. at the door.  For tickets, call 734-425-0079 or 734-421-1760.
Swami Beyondananda is the alter ego of writer, humorist and workshop leader, Steve Bhaerman. The Swami, whose favorite yoga pose is tongue-in-cheek, is the spokesperson for a new non-religion, FUNdamentalism (accent on "fun"). Says the Swami, "We are strictly non-dominational."
Steve was pursuing a career as a teacher and writer, when a funny thing happened. The name "Swami Beyondananda" flew into his head one day in 1979. As Steve tells it, "I got struck by enlightening during a brainstorm."
The following year, when he and a cohort were casting about for a comic mascot for their ground-breaking holistic publication, Pathways in Ann Arbor, Swami's name popped back up.  Pathways was one of the first publications bringing together holistic health, personal growth, spirituality, and politics.
Before long, Swami was the most popular feature in Pathways, as he held forth on topics such as "Everything You Always Wanted to Know About Sects" ("... unbridled sects can lead to unwanted misconceptions ...") or Tantrum Yoga ("... the latest rage on the path to ire consciousness").
When Steve decided to pursue comedy as a full-time career in 1985, the Swami was the obvious vehicle.
Audiences have delighted in the Swami’s "comedy disguised as wisdom" and "wisdom disguised as comedy".  Attendees will have the opportunity to ask the Swami answerable questions, and receive his “questionable answers”.
He can be found online at www.wakeuplaughing.com.

Posted by colleen mills at 6:07 AM No comments:

Thanks to Ann Abdoo's talk at our meeting, we can all understand the importance of passing the Youth PROMISE Act.

Click HERE to watch her talk.
Posted by colleen mills at 6:03 AM No comments: