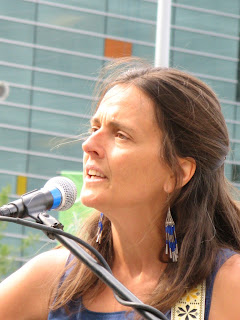 The public is invited to celebrate the 9th anniversary of the Citizens for Peace and enjoy a Concert for Peace with local peace troubadour Julie Beutel on Tuesday, November 13th at Unity of Livonia at 7 p.m.

Julie Beutel is a singer, guitarist, teacher, mother, and peace activist who spent many years living and working in several European and Central American countries.  She worked with Witness for Peace in Nicaragua during the war for almost two years. She has performed before 20,000 people in D.C.; and smaller audiences in her many concerts held in her home, coffee houses, schools, nursing homes, peace rallies, and numerous fund raisers for many charities. Julie has the ability to make you cry, laugh out loud, or squirm.  Her voice is beautiful and rich.  Her performances are personal, intimate and fun.  She tells stories, cracks jokes, and shares her passion for the truth. She loves to sing and perform more than almost anything else. Her audiences enjoy her and send the love back in a mutual exchange of joy.

The Citizens for Peace will present their first Compassionate Citizen Award honoring
Caroline and Jerry Trout.  When Caroline’s cousin and her husband were killed in an accident, they left five children including a toddler.  Caroline and Jerry adopted all five children to add to their family of two children. At Jerry Trout’s recent funeral service, their now adult children expressed their love, gratitude and admiration for both of their parents, showing that compassionate action is like a boomerang – it comes back to the sender. Telling stories of local heroes like Caroline and Jerry will hopefully inspire all of us to act compassionately in our own lives.

Following the concert, the celebration will end with participants enjoying an anniversary cake.
All are welcome.
Posted by colleen mills at 12:45 PM